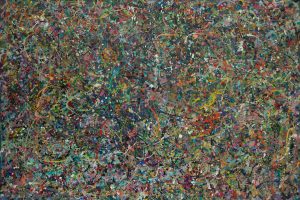 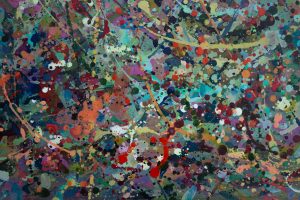 In 2018 I got lost again and wandered into an alien jungle. This time it was while walking in the forest around Mount Dandenong. Again it was a subtle change in the scenery – the occasional appearance of a brightly colored plant that got me curious, wanting to continue down the path.

The path rounded a corner, and a beautiful view was revealed. Before my eyes, in the middle of an alien jungle was a clearing with a small lake at its center. Under the purple-tinged sunshine, several hundred of many species of strange creatures were enjoying themselves. A group of what can only be described as iridescent lizard-like gorillas had fired up a gas-powered barbeque and were standing around drinking cans of beer. Peach colored feathered seal aliens were flinging themselves into the dark blue waters of the lake from a rope suspended from a large overhanging tree.

I was having trouble taking in the sheer weirdness of it when a sizeable red-colored fish with arms and legs came riding out on a mountain bike from a path near to where I was standing. It stopped and shouted, “Hey Bert, how’s it goin’ dude?”

Out of fear that I was losing my mind, I turned and ran back to the safety and normalcy of planet Earth. I quickly started on another abstract expressionist work to explain what I saw.

This painting is available for purchase for the princely sum of $500 + shipping.

Please use the contact form to inquire about purchasing this painting.

Purchase a wide variety of prints